Democracy and the rule of law must be restored to Thailand 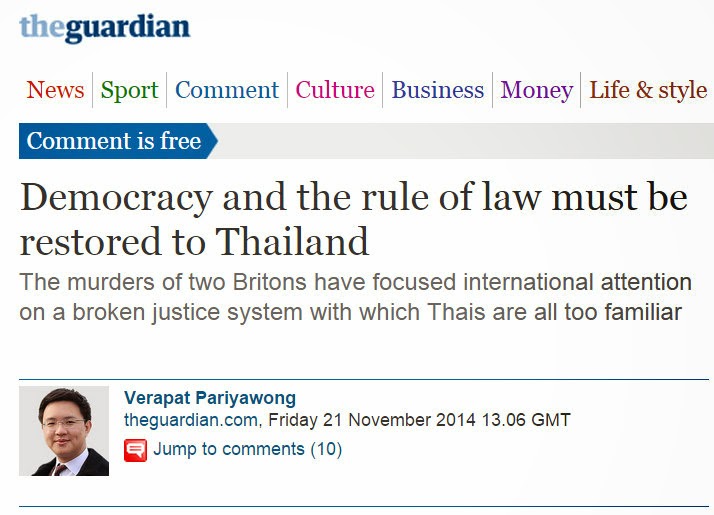 This article is published on The Guardian - Comment is Free

It has been two months since the brutal murder of Hannah Witheridge and David Miller on the Thai island of Koh Tao. The Thai authorities’ handling of the case has caused additional heartbreak for the victims’ families and damaged Thailand’s reputation as a tourist destination. It has also exposed the brutality of the country’s flawed justice system.

The beginning was awful enough. Two young British citizens on the holiday of their dreams went out to the beach one evening, and never came back alive. Two days later, the head of Thailand’s military regime, who had taken power in a May 2014 coup, responded insensitively by advising female tourists not to wear bikinis on the beach in order to stay safe.

Under mounting pressure, the Thai police rapidly announced that they had identified two suspects – conveniently, also foreigners; they were young migrant workers from neighbouring Myanmar, who had apparently confessed to the crime not too long after they were arrested.
But then the case began to disintegrate. Thai internet users raised substantial questions concerning the official version of events. Allegations surfaced that the suspects had been tortured or physically mistreated by police, and their lawyers eventually retracted their confessions. The British Foreign Office summoned a Thai diplomat, while Myanmar and human rights lawyers expressed grave concerns. Yet the Thai junta insisted that the correct culprit has been caught, and the police warned that social media criticism on the case can constitute a crime.

A hundred thousand people signed an online petition asking for an independent investigation. By early November, Thai prosecutors said the two Myanmar men will remain locked up while the investigation is not ready for trial, whereas the Thai human rights body conveniently postponed its inquiry due to scheduling issues.

What happens in the case of Hanna and David are not exclusive to foreigners. Many Thais each day struggle to find access to justice and their plight are often unheard of. The recent military coup and the imposition of martial law however has heightened the concern on how Thais are facing justice under military court jurisdiction.

In October, a Thai military court sentenced two anti-coup civilians to jail on suspended sentence. Chainarin Kularbum was given a three-month suspended sentence for joining a public anti-coup crowd which was larger than five – the limit set by the military regime, while Yodyiam Srimanta received a six-month suspended sentence for not reporting to the junta's summon – one of military practices introduced by the regime to curb civilian dissenters.
There is no appeal available for Chainarin and Yodyiam, and to make the matter worse, the military court ordered all observers not take notes during the trial while the junta regularly warns media to restrict any criticisms.

In another recent case, two university students Patiwat Saraiyaem, 23 and Pornthip Munkong, 25, were arrested and held without bail for over three months before a charge could be brought. One might question if they are serial offenders posing flight risk or threats against witness. After all what they did was staging a fictional play at a university, but seen by the police as lèse majesté or defamation of the monarch.

Even the top leaders in Thailand can’t seem to escape the problem either. In 2006, the military staged a coup to oust Prime Minister Thaksin Shinawatra and then appointed his opponents to investigate him and examine his assets, leading to controversial convictions that forced him to remain in exile.

In 2008, Thaksin’s ally and successor Samak Sundaravej was sacked as Prime Minister for hosting a cookery programme on television; this was declared to be a conflict of interest by the constitutional court whose members had been appointed after the 2006 military coup.

Then in May this year, the government led by Yingluck Shinawatra, Thaksin’s sister who also had won a democratic election, was also overthrown by the military. This followed a series of controversial judicial decisions which invalidated election results, removed the Prime Minister, and blocked the government from resolving protests which shut down Bangkok streets for several months. The military took this as their pretext to intervene, and the courts seemed to find no problem with that.

Consequently, any democratic effort to scrutinize politicians and subject them to justice system is perceived as irrelevant, as staging a coup becomes the ultimate solution. Yingluck for instance is now facing the bizarre prospect of retrospective impeachment by a post-coup assembly which could result in political ban.

Thailand is loved by many around the world but it has entered dangerous waters not merely because of its failure to prevent murder, but by its apparent disregard of fundamental rights especially in areas of access to justice. Thais too are victims in this.

Tourists from Britain and around the world count on our justice system to be fair and transparent. Now, we Thais must count on the international community to demand the return of Thai democracy and to restore the rule of law. That surely must include reforming the Thai justice system and systematically ending the injustices which it has been used to perpetuate

Verapat Pariyawong is a Visiting Scholar at SOAS, University of London. He served as Special Counsel to the Deputy Prime Minister of Thailand prior to the coup d’état of 2014.

On 27 November the Centre for Commercial Law Studies, at the Queen Mary University of London will host Verapat Pariyawong and a panel of experts to discuss the Rule of Law and International Investments in the ASEAN Region

South East Asia experts at SOAS University of London shared views at an event The Land of Smiles Under Martial Law: Thailand Six Months On, hosted by the the Centre of South East Asian Studies.